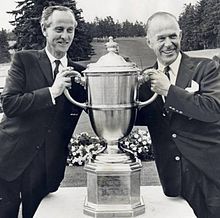 (8 February 1923 – 31 August 1976) was a Scottish amateur golfer, administrator, and golf course architect; described as one of golf architecture's finest representatives.

Charles captained Baron Hill Golf Club in 1961 and 1962, he was the non-playing captain of the Walker Cup team, in the Open 1962 Charles was referee for the final round pairing between Arnold Palmer and Kel Nagle.

Lawrie was born on 8 February 1923, in Edinburgh, he and his family moved to North Berwick where he learned to play golf, winning the Elco Medal in 1937 at the children's course at North Berwick Golf Club. He won the Gold Medal at a junior tournament at Carnoustie in 1939. He was educated at Fettes and Oxford, where 'he was a cricket star'. Whilst at Oxford University he gained five "Blues" in different sports. Charles fought in World War II as a 2nd Lt. in the Coldstream Guards. As Sheriff of Anglesey, he took part in the Queen's coronation visit in 1953 in Caernarvon Castle, he died aged only 53.

In the 1960s and 1970s, Lawrie held various posts with the Royal & Ancient, including Chairman of the Amateur Status Committee, Deputy Chairman and Chairman of the Championship Committee, and Chairman of the Selection Committee. He was president of the National Golf Club's Advisory Association in the mid-1970s. In "Palmer's Open" in 1962, Lawrie was referee for the final round pairing between Arnold Palmer and Kel Nagle. James Cusick of The Independent reports how the crowd were so fierce that year at Royal Troon that at the 15th, Lawrie was 'knocked head-first into a bunker during one of the crowd's surges'.

Lawrie went on to design golf courses as a partner of the golf architecture firm "Cotton Pennink Lawrie & Partners", which designed golf courses around the world. He designed the Duke's Course (1976), the location of the British Masters for 20 years, and the Duchess' course (1978) at Woburn Golf Club. The Duke's course has been described by Today's Golfer as a masterpiece, and regularly appears in the top 100 ranked courses in Great Britain and Ireland.